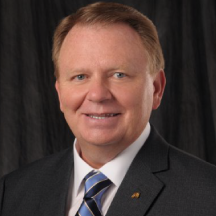 Jay Barrett is principal at both Amarillo Area Center for Advanced Learning (AACAL) and Amarillo Online School—positions within the Amarillo Independent School District (AISD) he has held since 2008. He was appointed on June 15, 2015 to fill an unexpired two-year term on the AC Board of Regents, a term of service extending through April of 2017. An administrator within AISD since 1991, Barrett previously has served as principal at Travis Middle School and Forest Hill Elementary School, and he has worked administratively at both Palo Duro and Tascosa high schools.

Barrett is no stranger to public service. He presently is serving his second year as president of the Harrington Regional Medical Center Board of Directors, and he is a campaign cabinet member for United Way of Amarillo and Canyon. He also serves on the Board for Boy Scouts of America’s Golden Eagle Council. Formerly head tennis coach at Pampa High School (1985-1991), Barrett remains a member of the United States Tennis Association.