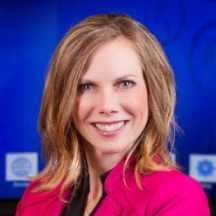 Amy Henderson of Amarillo is a commercial loan officer with a focus on small businesses with Amarillo National Bank. Henderson is a board member for the Amarillo Chamber of Commerce Business Council, board secretary for Window on a Wider World, on the Advisory Board of WT Enterprise Center and on the Advisory Board of the Small Business Development Center.  She is the past board president for the Texas Panhandle Regional Development Corporation. Henderson also served honorably in the United States Air Force as an Information Management Specialist during 1989 – 1993 and supported Operation Desert Shield/Storm.  She was one of the 2009 Top Twenty under 40 award recipients by the Amarillo Chamber of Commerce and was selected as the 2010 Business Woman of the Year by the Amarillo Chamber Women’s Council. Henderson earned an Associate in Accounting from Amarillo College and a Bachelor of Arts in Finance from West Texas A&M University. Amy is married to a Firefighter and is a Mom of two great kids.  And most recently appointed to Governor Abbott’s Commission for Women.