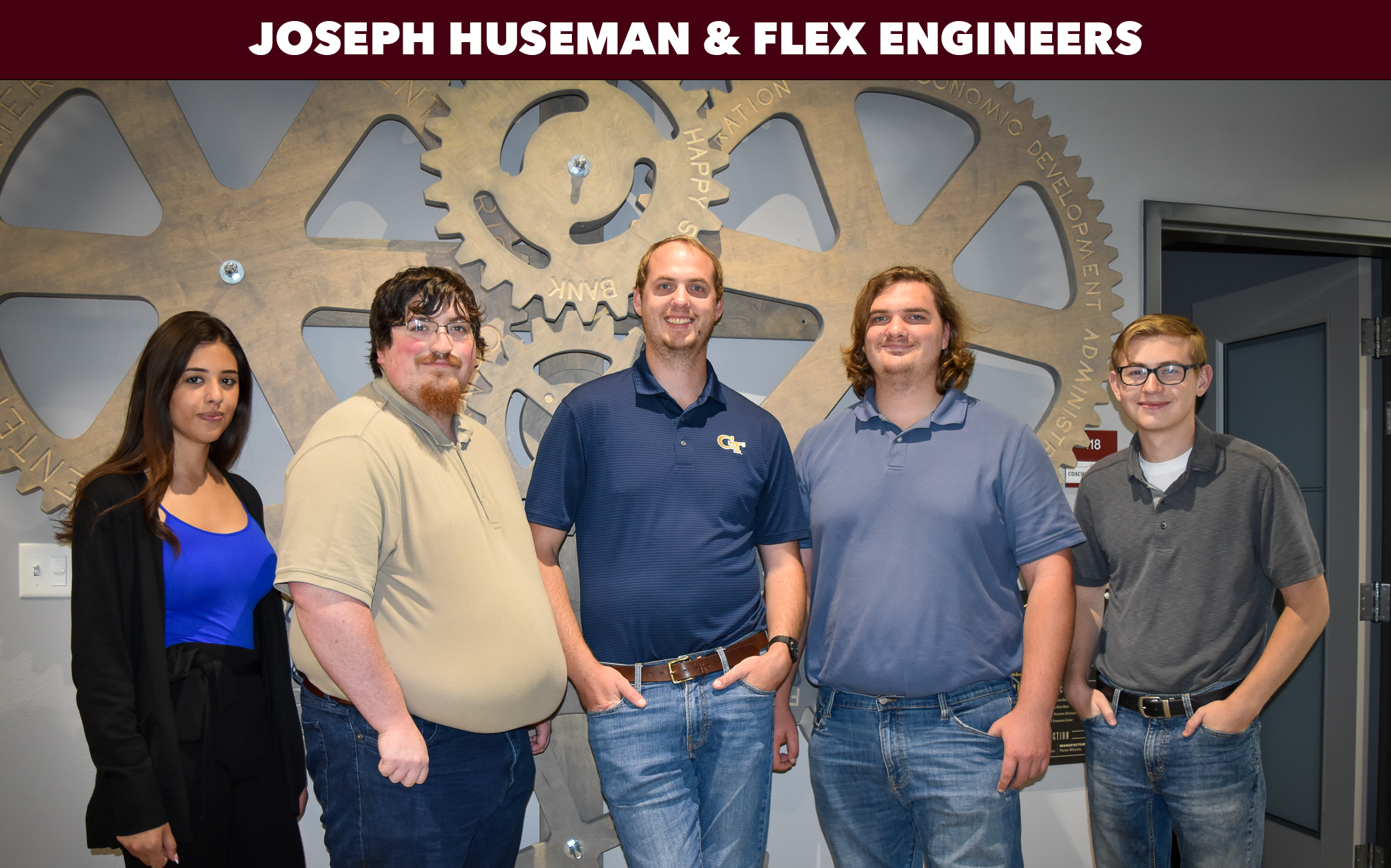 Joseph Huseman is an engineer, specializing in mechanical, electrical, civil, and structural engineering; he is one of three engineers in the state of Texas to specialize in these four competency areas of engineering. He started his company, Huseman Consulting Engineers, in 2017 and became part of the WT Enterprise Center community in 2019 when he participated in the Amarillo EnterPrize Challenge. With a recent name change to FLEX Engineers, as well as his impending graduation from the WTEC’s Growth Academy in October, we sat down and visited with Joseph about his journey as an entrepreneur with the WT Enterprise Center.

Tell us a little bit about yourself and your career as an engineer.
I grew up in Nazareth, Texas and wanted to play division-one tennis, so I went to a big fancy college. Since I was good in math, I thought I wanted to be a mathematician. I quickly figured out school was hard, so changed direction. Having grown up on a farm, I decided to become a mechanical engineer instead. My dream was to become an astronaut and do the NASA thing, which happened. I got a lot of cool opportunities, including traveling to Russia, to do some work with NASA spacesuits; I worked with some really cool people. I ended up getting frustrated with the bureaucracy of the operation. With the large size of the team, it was difficult to get things moving, so that made it hard to keep me entertained.

After my NASA dream passed on, I went to work in the oilfield at the suggestion of my mentors. It worked out and I eventually became a field-service engineer and learned how bad a couple of my designs were – I learned some hard lessons. I said I would never move back home, but I did; my family’s here, my fiancée is here, and I get to work with some really great people here as well.

Why the name change to FLEX Engineers?
I have a few different reasons for the name change. My “selfish reason” is that I wanted it to be less about me and have the option to grow the business and give my employees the opportunity to take on more responsibility, including leadership. This way our customers wouldn’t necessarily have to see the guy named Huseman, which gives me more time to myself.

The “better reason” is that as engineers, we can easily get stuck in our own ways, but we have a responsibility be a bit more flexible in determining our solutions, which also makes the job more fun. It’s our responsibility to work as a team with everybody, when a lot of times we (engineers) can easily be seen as part of the problem.

The “dumb reason” is that while listening to a podcast with my fiancée about SPANX, I learned that ending a company with the letter “X” is apparently more memorable to the consumer. It ended up being inspiration!

What brought you to the WT Enterprise Center?
That was completely selfish on my part. A friend of a friend of a friend had won the Amarillo EnterPrize Challenge (AEC) a few years prior, so I decided to also give it a try. Initially, my struggle in my business was marketing, so I thought the WTEC would have a network of good people who I could work with on that. Looking back, the WTEC really has been helpful in a completely different way than I had imagined. I came for the AEC, then I took advantage of the discounted office space, but ended up staying because of the positive changes over the last few years.

Tell us how the WTEC programs have changed the way you do business.
It can sometimes feel like if you don’t hit something over the head and drag it through the door, nothing will get done. The WTEC’s approach is much more patient. They don’t necessarily give you the answers, but they give you access to the resources that can point you in the right direction. They don’t do the work for you, but they challenge you. After talking with someone with the WTEC, I have to stare at a white wall for an hour afterwards; they push you to reflect on the things you really need to do. They give you new perspectives that come from someone with a lot of experience.

What I’ve learned from the WTEC has allowed me to stop doing things the hard way. I used to run the business based on my own pre-conceived notions of how to run a business, but they’ve encouraged me to run my business the way I need and want to run it. Connecting with people is important for the business, whereas I used to find comfort in my numbers. Connecting with different entrepreneurs helps you realize that you aren’t as crazy as you thought; it gives you access to a network where you can brainstorm solutions to problems.

While I didn’t trust the process at first, it ultimately allowed me to break down my barriers. My first mentor, David Terry, worked hard those first few months to tear down my walls and get me comfortable to ask the questions I really wanted to ask but didn’t because I didn’t want to look stupid, or because I was afraid I was breaking some unspoken business rule. They reassure you that everyone makes mistakes; it’s just when you make one, having that support makes it easier to feel human about it, learn from it, and move on.

Would you recommend the WTEC to other entrepreneurs?
Working with the WTEC, it is amazing to have access to some really successful people who are always available. Before I started my business, I used to have to schedule two to three weeks out with my managers just to talk with them. Here in Amarillo, you can call or text and usually get a response the same day. You have access to a lot of different types of resources. Outside of the WTEC, you might have access to only one or two successful people.

If you’re thinking about starting your own thing, you are going to feel crazy, especially if you are starting on your own. You need a support system! A lot of my mentors, I call them my therapists. They help you out by encouraging you; your decisions don’t always have to make sense all the time – you can kind of do things the way you want to – and that’s okay. As humans, we only have so much emotional capacity; when you’re running a business, if you are doing things out of line with who you are because you feel like you are supposed to, it can drain you so fast. It’s important having people in your corner that have done it before and have made the same mistakes.

What is your company working on right now that you are most excited about?
The 3D scanning arm, which will allow us to set up virtual tours, will change the way construction is done over the next decade. It blows my mind that no one is utilizing the 3D cameras on top of their hard-hats and taking “as built” drawings from those. I think it will completely change the way we do our work; the fact that we are 3D scanning right now, it helps our clients so much on existing buildings. There are so many better ways to do things than just tearing it out and building new, if you are willing to spend a little extra time on it.

Altura Engineering (one of the WTEC’s early success stories) introduced the 3D scanning arm to us. They found the technology through some of the best manufacturers and we kind of just piggy-backed off of what they were already doing. As a business owner, the best advice I’ve ever received and the most industry-changing things we’ve done, has come from entrepreneurs who are normal people who want to help. I thought the best things in life would be the things you pay for, but it’s the free advice you get from those down-to-earth people who started in the same place you did; they want to help you through the same struggles they experienced.

What would you say to a company considering the WTEC?
Give it a shot! I initially called the WTEC and talked to them for an hour and realized they weren’t as crazy as I thought they would be. The support system of the WTEC is really good about telling you what you need to hear, and not what you want to hear. You eventually get to the right place on your own, and you feel like you did it, because of that support system; they keep showing up and helping – it makes you want to stick around just a little longer every time.