Do What You Want

Do What You Want

A large part of life is figuring out what you want to do with it. Many people choose the route they think will guarantee security: status, wealth, etc. There are a few people in this world who are brave enough to go after what they really want, not caring about fear or risk.

Kent Harris, owner and founder of Blue Sage Pottery, is one of these individuals. Out of his realization that there’s only enough time on earth to do what you love, Blue Sage was born.

“When I was 18, I got super sick one year around Christmas. I think that changed me. Coming out ofthat, I think I was like, “Whatever. I’m going to do exactly what I want.’”

In 2001, Harris followed his (at the time) girlfriend to the University of North Texas to do her master’s while he took classes in pottery. It was there he experienced the harder lessons of the term “motivation.”

“There was a professor there who was top of the country. He later became like my second dad,” Harris said. “He would give me these impossible tasks to try to push me hard. Well, in one of those critiques, he broke every single one of my pots that I had made, told me to drop out of school, that I was the worst thing he’d ever seen in 40 years. He was screaming at me and said ‘What do you want to do? Why you are here?’

“And that’s when we left. Cause at that moment I thought, ‘This is exactly what I want to do.’ I did not know how I was going to get there . . . but I think that’s where the ship set sail.”

And it built from there.

Harris and his wife found their way back to the Texas Panhandle to finish school at WTAMU. In February 2003, Blue Sage took root and began its journey in Canyon.

“Looking back on it, it’s so interesting because I don’t know how we had the guts to open it, like the audacity to think, ‘Let’s go get a business license and try to sell everything we make!’”

“In those days I wasn’t a very good businessperson at all. In art school you’re really taught not to worry about business.”

Like most entrepreneurs, Harris faced great difficulties at the start.

“There’s about 5 years in there I don’t even like to think about because it was sheer adversity and thinking back, I just don’t know how I stayed on the horse. I just kept going.” 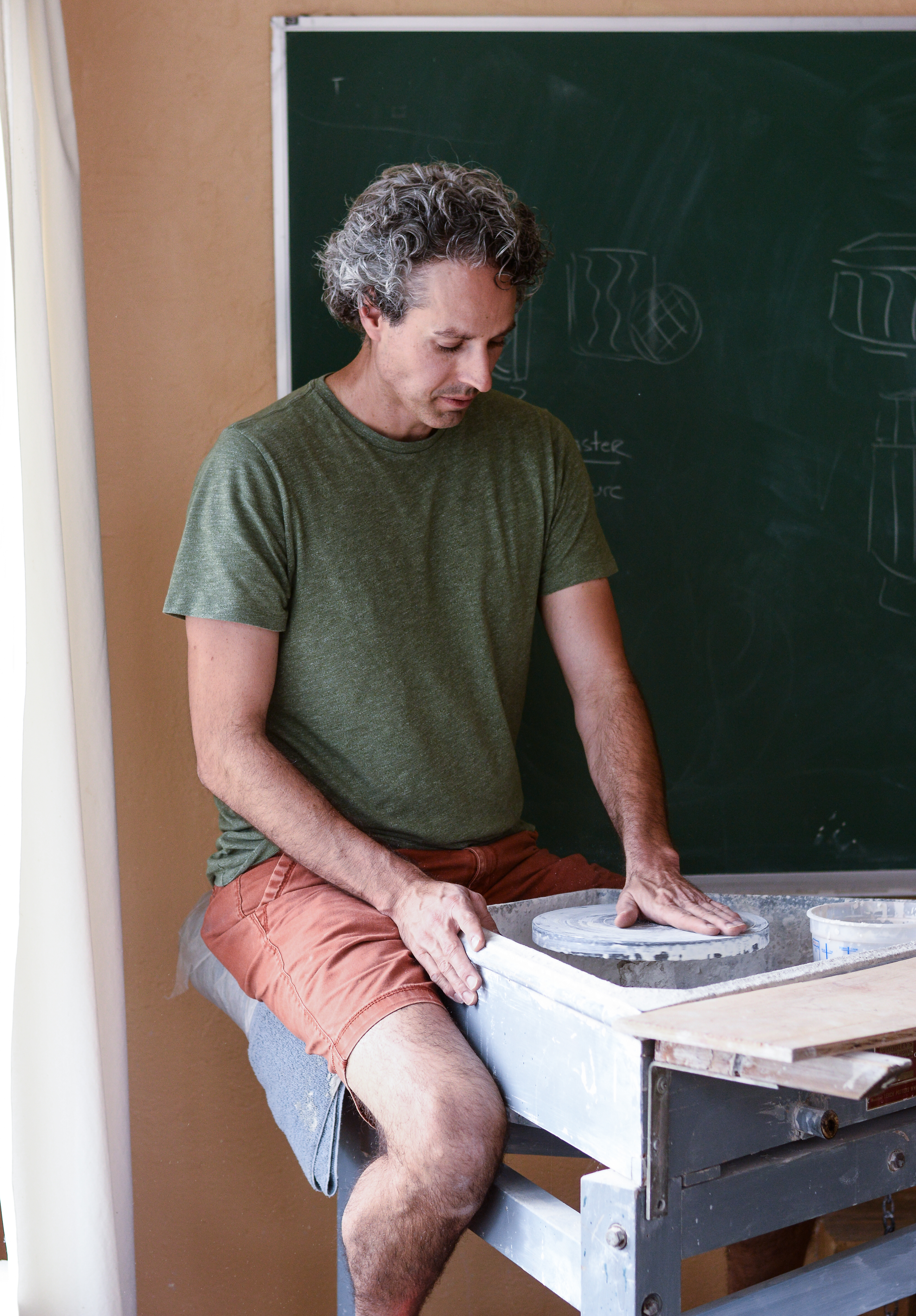 Harris is motivated by challenges and thrives on opposition, so the grueling work of pottery was right up his alley.

“That’s another thing that really interested me in pottery is that it’s knock-down-drag-out work, and I LOVED it. It was like tennis training for me, ‘How long can you keep going? Like can you go until you fall over?’ That’s what I liked, and it fit me perfectly. So that’s all I started doing. And as the business started to grow, I mean it went up and down, and for a 6-year period it stayed flat, I didn’t know what to do.”

In 2009, Harris decided to go to Baltimore to do a wholesale show, making 50% on his orders. After 4 years and numerous attempts to satisfy customers, but feeling dissatisfied and exhausted himself, he came back to the Panhandle with a clearer vision of his mission and some new business skills.

“I had a realization that the reason they’re not selling is because the generation had changed. My generation and the ones younger than I am are going online, so they’re not going into stores buying anything, so I started pushing online, and my Esty business started going out the roof.”

Harris now sells his pottery on Etsy and Amazon, in addition to his 6th Street store.

Because of Harris’ drive to tackle challenges, the WT Enterprise Challenge really caught his attention. He had heard about the Enterprise Challenge years before but thought he wasn’t ready to take it on. The limiting thoughts in his head kept him from pursuing it at first, but one day, all of that changed, and he hurdled past his own hindering self-talk.

The WT Enterprise Challenge prize was a $100,000 grant from the Amarillo Economic Development Corporation. To win, participants had to submit a business plan to the AEDC judges.

Before entering the contest, Harris talked on the phone with the WTEC director about the contest guidelines.

“I’m going to tear this thing apart,” he thought. 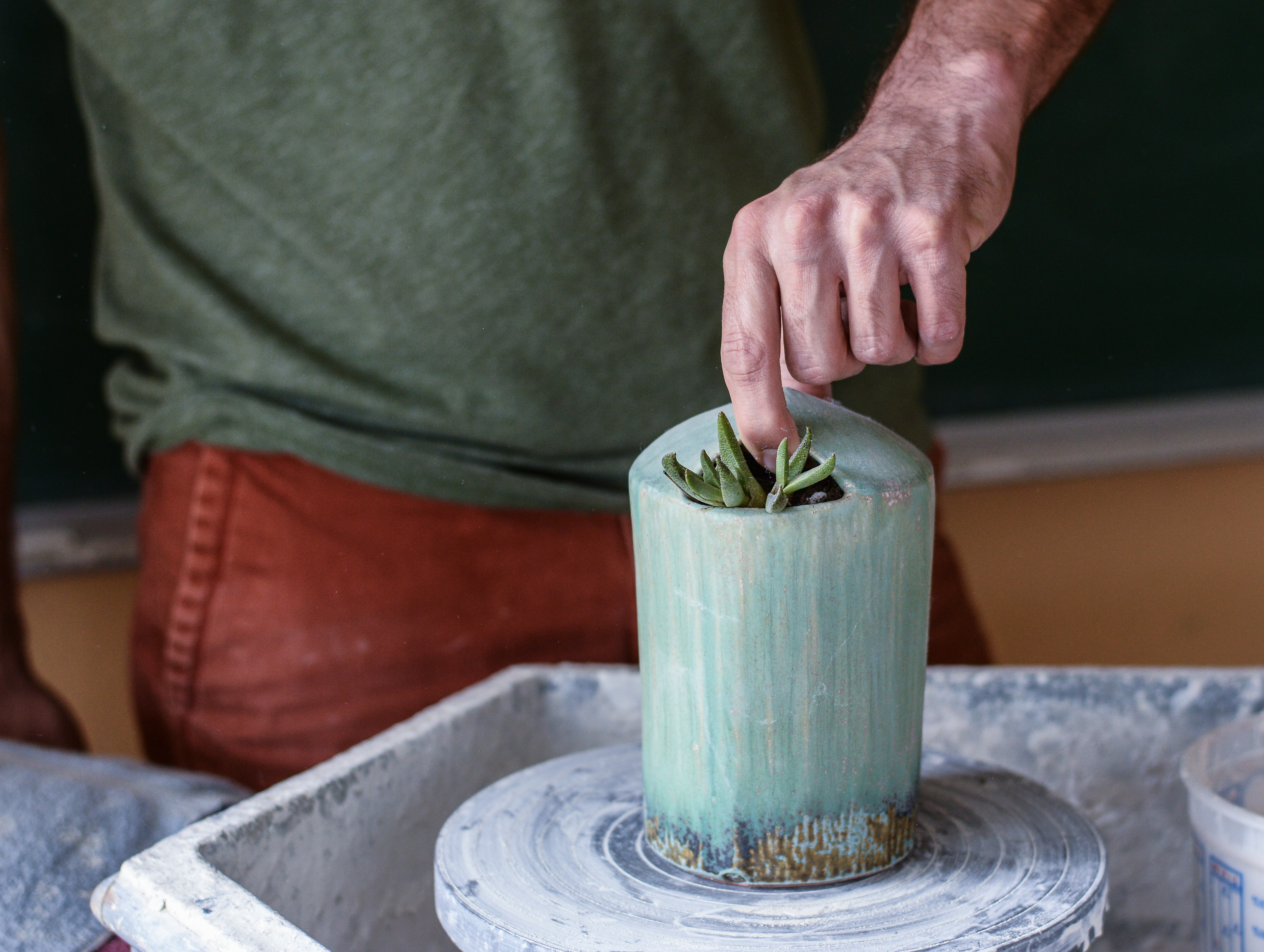 Around 60 people entered the challenge. That number was eventually culled down to 6 or 7 people who were asked to present to the AEDC and their panel of judges. Harris confidently presented his plan to the judges, which was uniquely constructed around cremation urns. He identified his market and fearlessly illuminated the need for his plan to win. And he knew he would win.

“I knew when they handed me that microphone that I was going to Bob Mills that thing.”

Sure enough, Harris won the Enterprise Challenge despite their original hesitation about his lifestyle business. The $100,000 prize boosted his urn business to a national scale.

In any business, there is growth that wanes, yet Harris has identified this as a normal aspect of business and has taken on the challenge of improving his sales during these times of waning.

“In business, it will grow, and then it’ll plateau, and then you have to figure out how to get it up to like 20% growth.”

Over the years, Blue Sage has expanded significantly, despite having slower seasons.

“It’s neat looking back, like we kinda set this thing out together, and it’s just growing. Together I think both of us are just like, ‘Wow, that happened. And still, this is happening.’’’

Harris not only faced the challenge of managing his business finances, he also had to face the verbal challenges from outside, which can so easily deflate someone.

“For a couple hours, you’re like, ‘Am I making the right decision?’”

But Harris figured out he was on the right track.

“You know, if it makes you happy, if it’s your bliss, you should do it. That’s where you find your joy, and don’t do anything else.”

The important thing is to start, said Harris. Just start.

“Your time is finite on earth, anyways, and so, if you have a passion or seem to like something, I don’t think you should worry too much about how you’re going to get there, just start,” Harris said.

Blue Sage Pottery is a tangible representation of what it means to “just start.” By viewing the challenges as opportunities to grow, Harris not only boosted the projection of Blue Sage to a national scale, but he also proved there is a niche that wants what he has to offer. 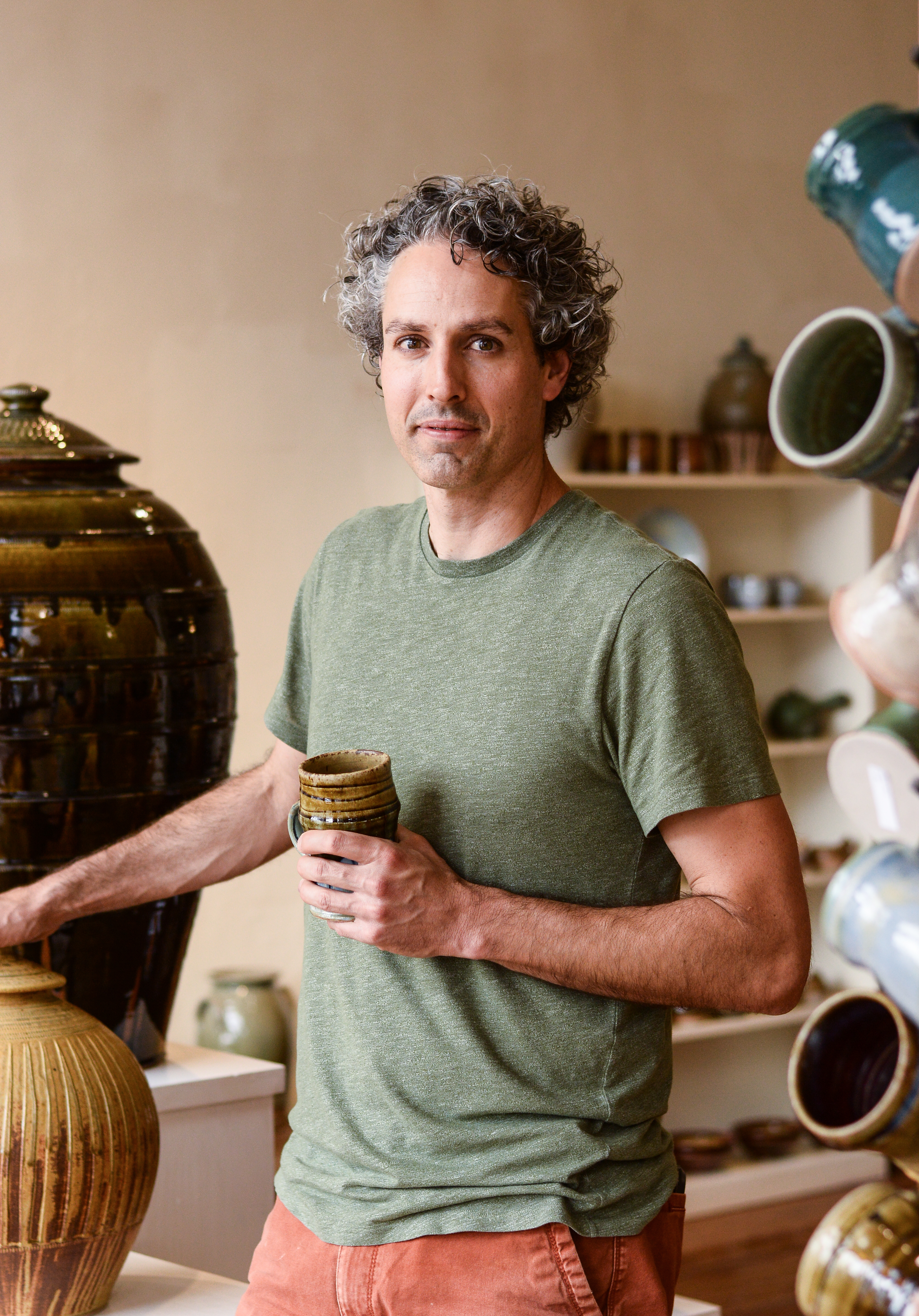